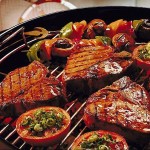 If you missed the continental shift in barbecue culture in the past decade then catch up next weekend at The Yak’s Melbourne Barbecue Festival. The traditional Aussie barbie of chops on a modest hotplate has been supplanted by great American contraptions that look like a cross between a 44-gallon drum and a small truck. The best of American barbecue culture is celebrated at this festival at Flemington Racecourse. Guests this year are the Kansas City Barbeque​ Society and 76-time grand champion pit master Jim Johnson. Also giving demonstrations and classes are local barbecue enthusiasts such as Lance Rosen and Bob Hart. Expect good music, good food and loads of American-style meat cuts.

Follow
This entry was posted in Events, Local News. Bookmark the permalink.