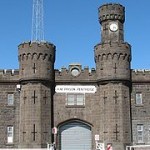 This iconic building has opened its gates for a spooky Lantern Ghost Tour.

Built in Coburg in 1850 to relieve Old Melbourne Gaol of some of its inmates, it’s housed some of Australia’s most infamous criminals, including Ned Kelly and Chopper Reed.

The prison officially closed on 1st May, 1997. The epic bluestone facade of the building remains, however, as a testament to its fascinating and terribly sad past. In 1967, Victoria’s last hanging occurred at Pentridge, and in 2011 almost all of Ned Kelly’s skeleton was found in an old wooden axe box there. Bets on that this place is totally haunted. The Bluestone Cottage was where the warders lived. And this is now where the Coburg Historical Society has a Pentridge Prison information display.

With executions, ghost sightings and 44 bodies buried on site, there are plenty of scary stories to tell. This two-hour tour on Friday, December 13, takes you through the old prison site that was closed in 1999 and since has been partially redeveloped into housing estates. The Bluestone Cottage, 82 Bell Street, Coburg. Cost: $25-$35.

Follow
This entry was posted in Events, Local News. Bookmark the permalink.