The Grand Final Comedy Debate is the premier AFL endorsed event for women during the Grand final week. 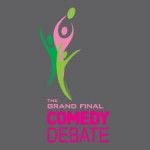 “THAT FOOTY ISN’T BROKE SO DON’T TRY TO FIX IT!”

The event boasts a large silent and main auction segment which raises funds towards the Breast Cancer Network Australia.