At Last – The Etta James Story

At Last – The Etta James Story 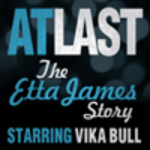 Vika Bull, one of Australia’s most respected, powerful soul singers, is set to tell the story of one of the most influential soul singers of all time: Etta James.

Written by critically acclaimed UK author John Livings, At Last: The Etta James Story will premiere at; Clocktower Moonee Ponds from the 15th Feb 2013 and, Melbourne’s Athenaeum Theatre from 19 February 2013, just over a year after Etta James’ death in January 2012.

Tickets are on sale NOW for Clocktower, via Clocktower site and from Friday 30 November via Ticketek for the Athenaeum Theatre.

Vika Bull is a commanding singer with an impressive career, having sung alongside some of the Australia’s most iconic voices including Paul Kelly, John Farnham, Tim Finn and The Black Sorrows, and supported world famous musicians Bob Dylan, Sting, Joe Cocker and Billy Joel.

“Etta James has had a huge influence on my musical journey. Someone played her record to me when I had just started performing, and from then on I was hooked. She had a voice so powerful it could knock you over, and I just love her sassy cheekiness on stage!” says Ms Bull.

The narrative concert will see Vika put her heart into telling the story of Etta’s turbulent life and give over her soul to voice Etta’s most beloved songs including ‘Tell Mama,’ ‘Something’s Got A Hold On Me’, ‘Pushover’, the heart rending ‘I’d Rather Go Blind’, her iconic signature song ‘At Last’ and many more.

Etta James’ prolific career was shadowed by recurring problems with drug addiction; her time spent playing to thousands of fans juxtaposed with periods inside several prisons and rehab clinics.

“Like many famous musicians Etta had a tough life, but she kept on coming back – singing and performing until she became ill in 2010. Now, a year after her death we are telling her story, and all I can say is I hope I can do her justice,” says Ms Bull.

Director Simon Myers is thrilled to have Vika Bull tell the story of Etta James.

“Vika is a phenomenal singer – her voice has a similar raw strength and depth of emotion to Etta’s, and that compiled with her decades of experience in the industry make her the perfect fit,” says Mr Myers.