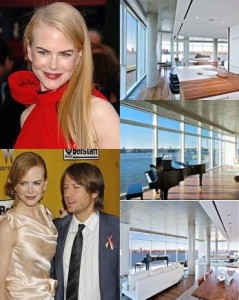 Australian actress and Hollywood darling Nicole Kidman has sold her 12th-floor apartment at 176 Perry Street, the famed Richard Meier-designed building in the West Village, according to public records filed with the city today.

The 3,785-square-foot residence, which has a 30-foot-wide entrance gallery as well as sweeping views of New York Harbor, features three bedrooms, 3.5 bathrooms and sold for $16 million

The building, which is one of two Meier-designed towers on the north and south corners of Perry and West streets, has been a major draw for celebrities. Jim Carrey was said to have considered buying in the building two years ago and fellow Aussie Hugh Jackman reportedly bought in the property in 2008.

Meanwhile, Kidman and Urban are reportedly expanding their Sydney, Australia home. The couple is said to have almost doubled the size of their apartment down under last week by buying the apartment next door. The spread has views of the Sydney Harbor Bridge and the Opera House.